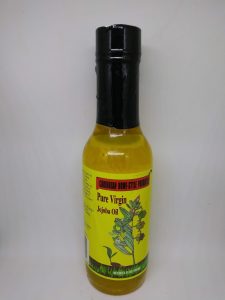 Pure Virgin Jojoba oil is among the widely used oil obtained from the seed of the shrub. The jojoba plant was used by Native Americans for many purposes and used the oil from the jojoba seeds on their hair. Jojoba oil contains ingredients, such as vitamin E, vitamin B complex, silicon, chromium, copper and zinc. It has a very high percentage of iodine at 82 percent which gives jojoba oil its power to heal.

The name “jojoba” originated from the O’odham name Hohowi. Jojoba was first used by the Native Americans.

Jojoba Oil is an oil extracted from the seeds of an American shrub the leathery-leaved evergreen shrub or small tree that produces these seeds. Jojoba oil has a rich naturally golden colour.  For the Hair (apply a small amount to hair and scalp): Perfect for dreadlocks, and twists help with hair growth, great as a hair softener.

For the Skin: As a massage oil, for skin irritations, such as psoriasis, eczema, a skin cleanser, and facial oil. As a moisturizer for dry skin, for cuts, bruises, insect bites, and sunburn.